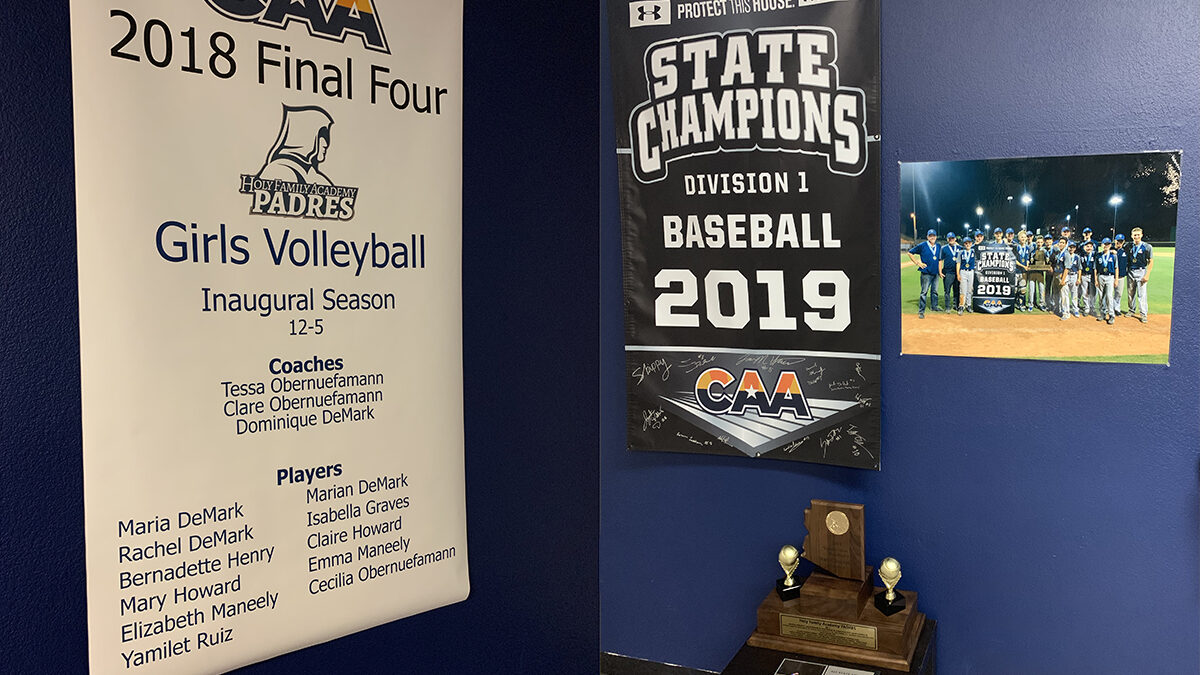 On Tuesday evening, May 28, the Holy Family Academy parents and teachers met for the end of the year sports awards and ice cream social, in order to recognize the achievements and sportsmanship of the athletes.

The Holy Family Academy boys played alongside the 91st Psalm soccer team this year in order to fill its team, lead by (and HFA Board Vice-Chair) Dr. Shannon Obernuefemann as their coach.

Coach Obernuefemann spoke about the boys efforts on the field, recognizing the season’s very competitive results, with 9 wins, 1 draw, and their only loss occurring in the semifinals of the CAA tournament.

A special thank you is due to 91st Psalm for their generosity in allowing HFA to compete alongside them in order to field an excellent team.  We look forward to another year next season!

The girls approached Athletics Director Mr. Ben Johnson at the beginning of the year, petitioning him to help them form a team.  Thanks to his efforts and the initiative of the girls, a team was put together rapidly, and games were scheduled.

The Padres were led by Mr. Jon Graves, and a corps of college girls: Claire and Tessa Obernuefemann, and Dominique DeMark.  Before the coaches handed out the end of year awards, they spoke about the necessarily low expectations the team had, given their youth and the speed with which the team was formed.

But the girls didn’t give – and reached the CAA state semi-finals in the fall tournament.  This was recognized when Mr. Johnson presented the girls with a Final 4 banner with which to remember the inaugural season.

The Coaches recognized the following players:

Coach Dominic DeMark took to the podium Tuesday evening to recognize the efforts and resilience of the Padres.  As has been reported while discussing the boys’ achievement in winning the CAA State Title for 2019, the Padres had a wildly successful season, considering the team was only able to field 11 players in 2019, out of a total of 52 students in the school. The team was comprised not just of varsity aged players, but boys from 7th and 8th grades as well; starting two of the 7th graders!

As if this was not already a challenge for the new team, practices were held either indoors for hitting, or on a softball field to run fielding drills – and the pitchers had only an artificial mound on which to practice.

The boys took up the example showed by a strong group of assistant Coaches: Pastor Cunningham from 91st Psalm served as the pitchers’ coach, Mr. Colombe was the team manager, and 4 college students coached the boys on positions and drills: Gabriel DeMark, Luke Maneely, Nelson Heckencamp, and Zach DeMark.