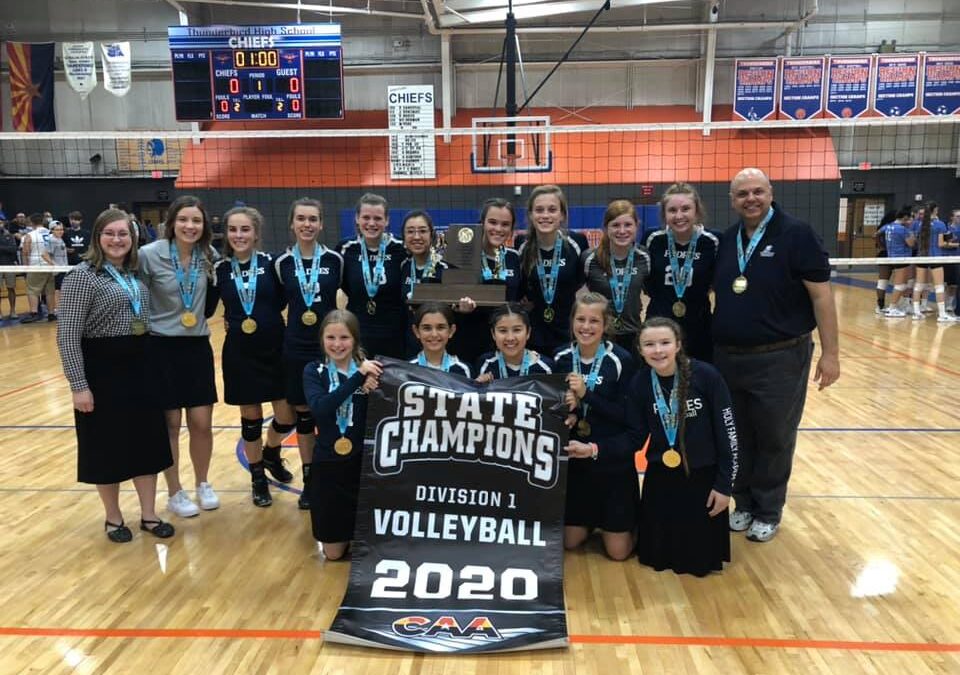 The Holy Family Academy Volleyball Team defeated rival Ridgeline in straight sets to win the CAA D1 Championship.  This is back to back State Titles for the Padres.  The Padres were great defensively out digging Ridgeline 73 – 36 on the night.  The Padres were superior offensively as well registering 52 kills to 25 for Ridgeline.  The offense was truly spectacular with 52 kills as a team in only three sets.  This is highest total for the Padres all season.  Everyone helped with the attack Ellie and Emma Maneely with 15 and 14 kills respectively, Hannah Wheaton and Rachel Demark with 9 and 5 kills from the middle, Marian DeMark added 6  ,  Maria DeMark had 2 from the back row, and Bella Graves got one herself.   Bella Graves was very busy with 49 assists on the night.  Here are some notes on the individual players.

Ellie Maneely was awarded the Player of the Game.  She led the team in kills, none bigger than the winning swing of the first set to stop a 5-point Ridgeline run.  She really came through when the team needed it.  The Padres never trailed after Ellie’s swing to seal the first set.  Ellie fittingly had the kill to finish off the match as well.

Emma Maneely ended her storied career with one of her best performances showcasing her well rounded skills. She had 14 kills on the night from all three offensive positions. She had 12 digs.  We scored 11 points on her serve, which led the team, including two aces.  She even got the officials to correct an erroneous call as our floor leader and co- captain.

Maria DeMark was the foundation in the Libero position.  She had 22 digs to lead the team.  We scored 9 points on her serve, second only to Emma, including 3 aces, to lead the team.  Maria’s serve receive performance was her  best of the season.  The offense cannot perform to this level without excellent back row play.   Maria is the best Libero in our league and showed it when it mattered most.

Bella Graves had an excellent evening with her main responsibilities of assists (49).  She also added 10 digs and 8 points scored on her serve with 2 aces.  Both of which were to finish the second set to stave off the Ridgeline rally.  Bella performance solidified her lead as the #1 ranked setter in the state of Arizona averaging 12.2 assists per set on the season.

Rachel DeMark had a terrific all-around performance.  We ask Rachel to do many different things because she is so capable.  She had 5 kills on 11 swings with no errors.  She helped receive serve  9 times during the game.  She had 5 digs, 1 assist, and a block from her middle position.  We scored 7 points on her serve, with three aces.  One of those seven points was the final point of the winning set.  We have yet to find a skill in which Rachel does not excel.

Hannah Wheaton joined us this season as a transfer from Jefferson. She played against us last season in the finals.  Many of her teammates from last year were on the Ridgeline team we faced in the Championships. .  Hannah’s job is to be an effective middle attacker.  She has far exceeded that this year and in this game.  She had 9 kills on 19 swings, 3rd most kills on the team for the game.   Her ability to attack from the middle takes the blockers away from our outside hitters making us much better as a team.  Hannah was outstanding in this game and we are glad she joined our team this season.

Marian DeMark was our leading hitter this season with 120 kills.  Ridgeline knew this and keyed on her the entire game.  Marian still had 6 kills for the game from the outside and right side, even while facing double blocks the entire game.  Marian’s ability to defend solidifies our defense She had an excellent game with 8 digs. She even added an assist.  We are very proud of how Marian led us this season and in our championship game.

Thank you to the Assistant Coaches, Domi DeMark and Sofia Falter.  Thank you to Principal Graves and our Athletic Director Ray Gonzales for the support. Special thank you to the Parents and Families for the support and love this season.  It takes a lot of work to reach the level of play that this team achieved.  The improvement from August until November was impressive.  That can only happen with time in the gym which can be hard on the families.  Thank you for all you have done to make this season a success.