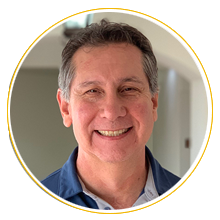 Mr. Celaya is a graduate of the University of Arizona with a degree in Chemistry in 1990. When he finished his undergraduate degree he began work as an environmental chemist and engineer at Magma Copper Company in San Manuel, Arizona.  He returned to school at Arizona State University on weekends and at night to obtain his Environmental Engineering and Management Certification in 1993.

He worked as an Environmental Engineer for the mining company until 1998 when he and his wife  moved away from Tucson to follow her training as a Physician.  They have 2 daughters, Anna (23) and Ava (19) who both attend the University of Arizona in Tucson.

Subsequent to his career in mining he also worked in Real Estate for a number of years and eventually responded to an ad to teach Chemistry to Nursing students for Mohave Community College.  When the family moved to Yuma, Arizona in 2003, he took a position teaching at Yuma Catholic High School (Chemistry, Algebra 2, Environmental Science). He worked at Yuma Catholic for 3 years and when the family eventually moved to Phoenix in 2006 he took a job at St. Gregory Catholic School for the next 11 years teaching Science, Math, and Religion to 6th thru 8th-grade students.

“I have been semi-retired for the past few years and was drawn back to part-time teaching after substitute teaching at HFA during the past 2 years.  I find the students and atmosphere of the school refreshing and look forward to another successful year!”