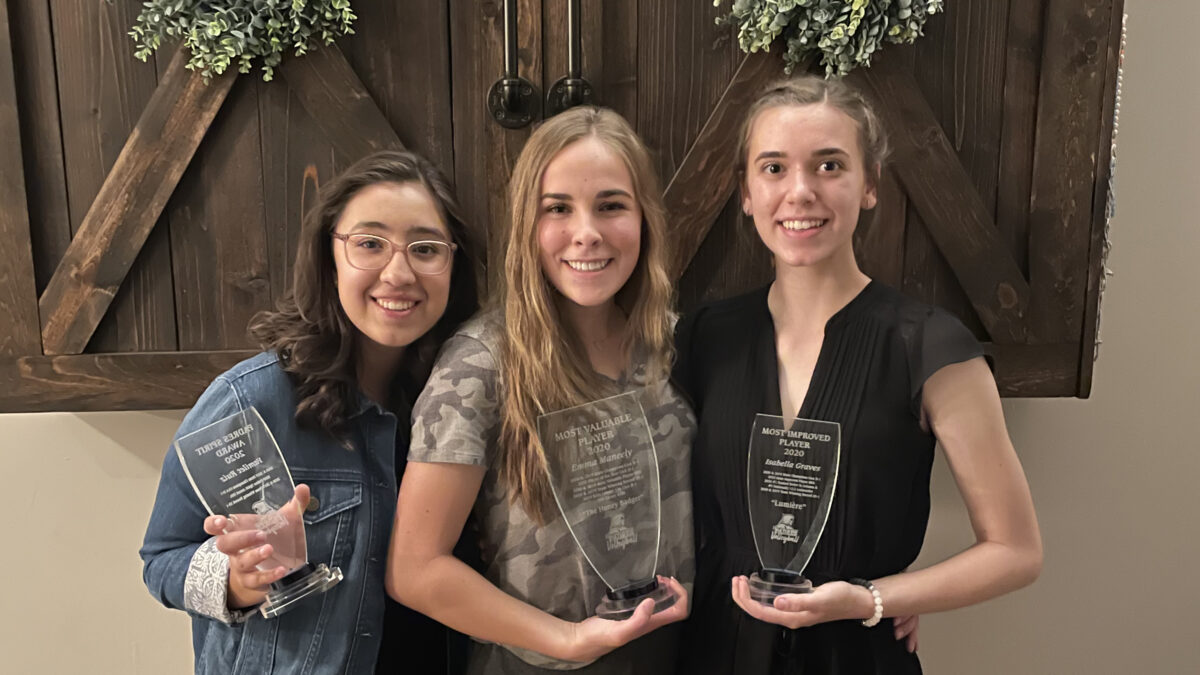 We celebrated our championship volleyball season on Friday April 16th with our annual awards banquet.  It was an outstanding event hosted at the beautiful home of Matt and Mary Maneely, coshosted by Maria Ruiz.  The night showcased the world premiere of our 2020 Season in Review video:

Every player and coach got  their moment(s) to shine on film, to  be interviewed in from of a crowd of about forty, and  to receive a gift to commemorate the season.  We do traditionally have three major team awards.   The Padres Award, s awarded to the player that best represents our  Catholic  virtues during the  season.  The other two awards are The Most Improved Player and our Most Valuable  Player.

Padres Award :  The list of virtues demonstrated by this player is seemingly endless, dillegence, humility, fortitude, and meekness to name a few.    This player did it all for the Padres from serving out the match in the Semi Finals, anchoring our JV unit, to helping organize our books.  When asked about her approach to the season she replied, “I just wanted to be able to help the team however I can,”  Which is exactly whey Yamilet Ruiz has earned our Padres Award.

Most Improved Player:   This player was a reserve defender that saw very little playing time in 2019 as a sophomore.  She dedicated herself in the club season to mastering a new craft of setting.  The result of her effort was that  she was named 1st  team All – State. She was  the only Junior on that esteemed list.  One of only two Padres on the All State team.    She finished the season ranked #1 in the state for assists per set at 12.2 in her junior campaign.  That number is also good for #5  nationally.  She was one of  teams best servers along with Maria DeMark.  When praised for her production, Bella deflects the attention to the greatness of the hitters that  she has the good fortune to set.     It is tough to imagine a more deserving player for this award. Congratulations to  Isabella Graves, Padres Most Improved Player 2020.

Most Valuable Player:  This player has distinguished herself as our only back to back team MVP award winner.  She was also named 1st team All State along  with Bella, and was named  the CAA Player of the Year 2020.  She is the only HFA Volleyball player to win the Player of the Year award.  She was named captain of both or our back to back State Champion teams by her peers.  She is the premier defender in our league and one of the top attackers as well finishing second in the CAA in kills(111)  only to Marian DeMark(120)  .   She will be missed for her great production but even more for her willingness to take over a game when we  needed it by seer force of will.   It is this ability that earned her the nick name “The Honey Badger”.   Thank you for all you have been  to our program.  Congratulations to our most decorated player and soon to be Holy Family Academy Hall of Famer,  Emma Maneely.