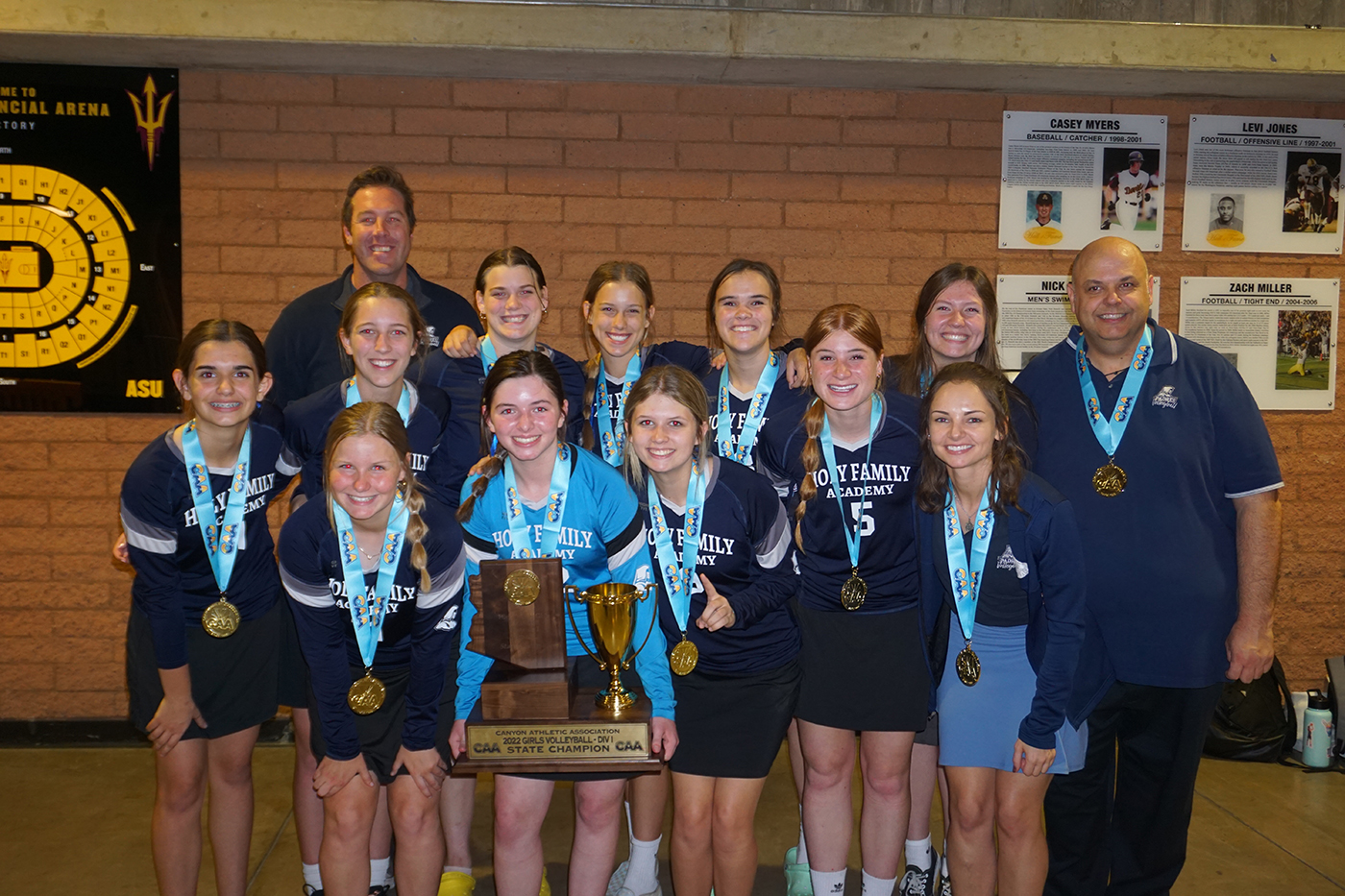 Holy Family Academy has been very  blessed in our short history. We recently celebrated our fourth consecutive CAA D-1 State Championship.  The team has a Won – Loss record of 76-3  over those four seasons.  The CAA has announced their All State Award winners. HFA is proud to announce that we have  four players on this esteemed list.  One of these award winners is  also the Player of the Year!  This is HFA’s third consecutive POY winner. 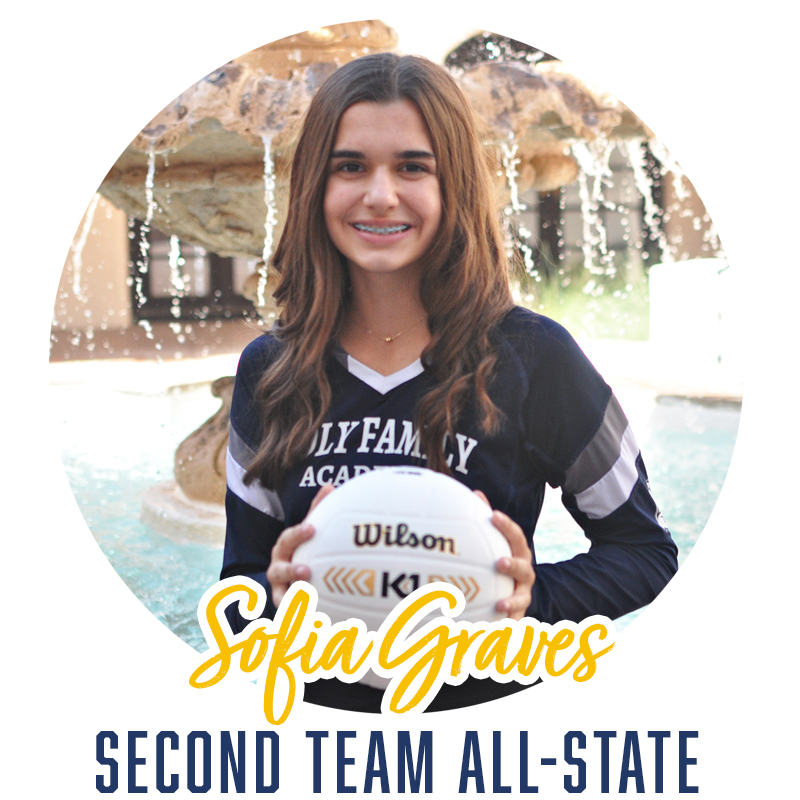 Sofia Graves #1  Setter, Freshman:   Sofia has been awarded  2nd team All – State.  She is the first freshman in HFA and league history to achieve this status.   This is Sofia’s second season in the starting rotation and first as a setter.  Sofia emergence as an allstate caliber setter was key for our success this season as it  enabled our veteran players to excel in their  roles. The goal was for her to be a competent setter which she greatly eclipsed.  Her 11.0 Assists per set is good for #1 in the CAA, #3 in the state of AZ and #25 nationally.  She led the team with 194 points scored on her serve with 87 aces. It takes courage to deliver these.  results as a Freshman on a team with 5 year veterans.    When asked about her success season, Sofia  attributes her success to two things 1. The greatness of her teammates.  2. Playing volleyball in the off season to work on her skills. Congratulations Sofia, the team would not have accomplished what it did without your efforts. The league has never honored a Freshman with an All State Designation before, but choose to do so  due to  your outstanding achievements. Well done Sofia.

These players are considered in the top 7 of Division 1 CAA Volleyball. 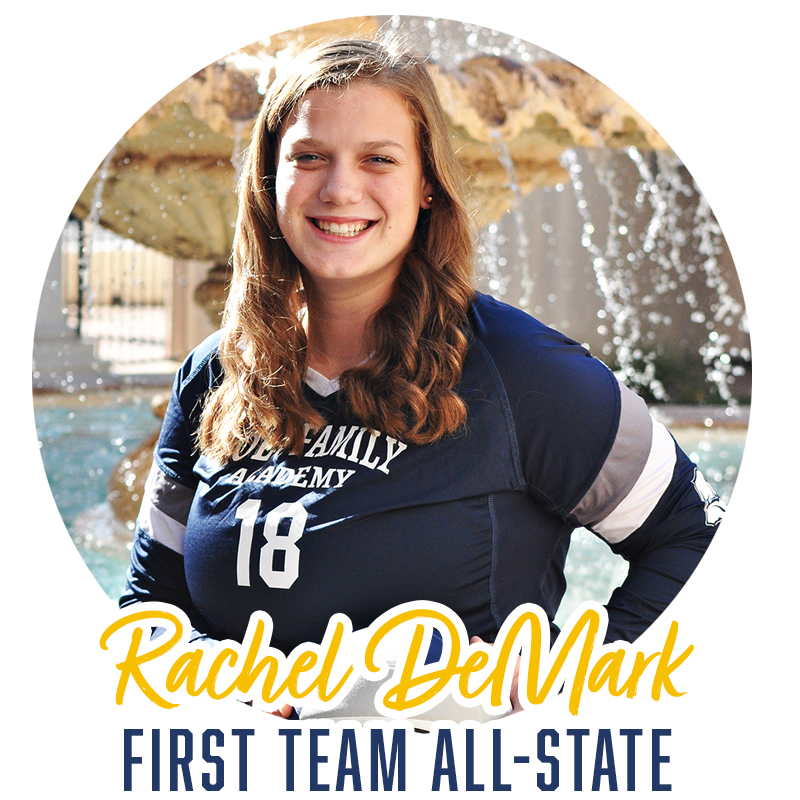 Rachel DeMark:  #18  Junior, Middle:  Rachel has been a key contributor to our success for 5 seasons.  This year she made a leap in her game becoming a true six rotational player, anchoring our defense as  both a middle blocker and a left back.  Rachel is a tremendous all around player which is very  rare for a middle.  Rachel had amazing stats this season with 154 Kills which is #3  in league.  128 digs, 19 blocks, 86 aces, and 51 assists.  We are blessed to have Rachel’s skill and leadership as the cornerstone of our team.  Congratulations Rachel to a well earned honor and entrance to our Hall of Fame!

Maria DeMark: #5  Junior , Outside Hitter:  Maria is an incredibly versatile athlete. Maria has been a starter for 5 years in every position.  She has been anchoring our back row defense as our Libero for the last two seasons. She transitioned to OH this season.  We needed her to be an adequate hitter for us to succeed and she turned out to be great!   She has 210 kills good for #2 in the league . She also had  156 points won on serve with 58 aces.  She continues to be a dominant defender with 155 digs and 220 serve receptions.  Maria’s transition from libero to a premier all around player was remarkable, her 210 kills is 2nd best total in HFA history!   Congratulations on an amazing season and well earned 1st Team All State Honor and entrance to the HFA Hall of Fame!

CAA DIVISION 1 PLAYER OF THE YEAR 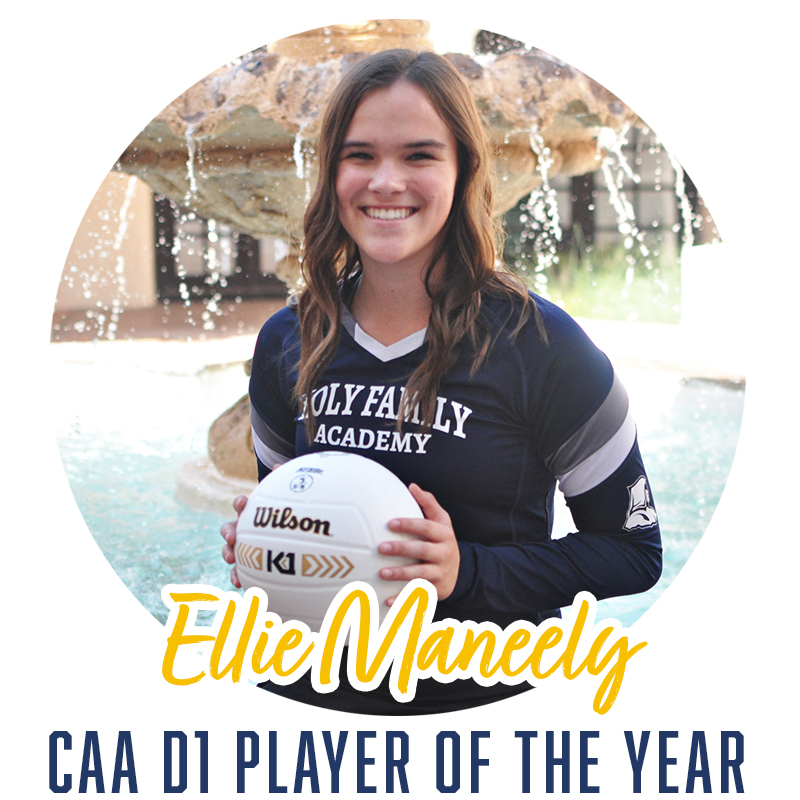 Elizabeth (Ellie)  Maneely:  #8  Senior, Outside Hitter:  Ellie turned in a season that is historic.   We needed her to have a huge season for us to stay on top of the league.  Ellie  answered  with 300 kills, which is the best in HFA and league history. . She is the #1 ranked attacker in the CAA, #9 in Arizona. To put in perspective, Ellie had more kills (300)  than our top rival Thunderbird Adventist (296)  as a team!.  Her 230 serve receptions and 158 digs led the team. She had 120 points served with 56 kills.  Ellie had 20+ kills against Basis Chandler and Ridgeline, both high level D2 teams.   Ellie was named Player of the Match in two State Finals(2020, 2022)  tying the team record with Marian DeMark (2019, 2021)  .  Ellie has exploded into our Hall of Fame this season,  the best single season in CAA history.   Congratulations on a well deserved Player of the Year honor.   Thank you Ellie for all you have meant to Holy Family Academy Volleyball.

CAA COACH OF THE YEAR 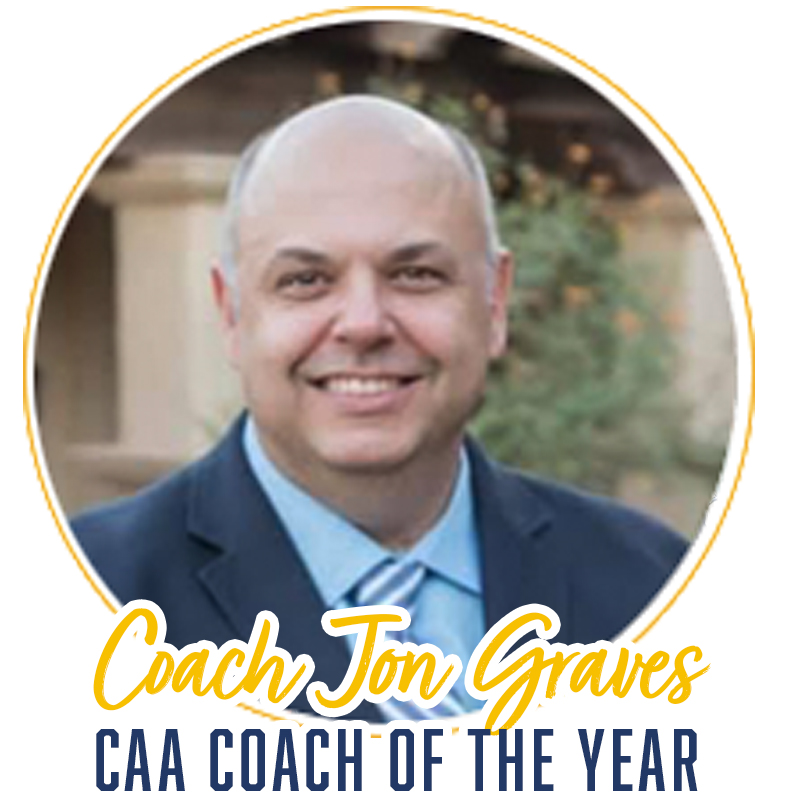 Coach Jon Graves:  Finally, congratulations is also due to Holy Family Academy’s Volleyball Coach and Athletic Director, Jon Graves, for being named the CAA’s Coach of the Year for the third time. Coach Graves’ leadership on and off the court is an inspiration for all the players, and we are so grateful for his generous time and efforts given to our young ladies!